Photocatalysts for clean fuels and chemicals production: Materials and Fundamental

Nowadays both fuels and the majority of chemicals production are derived from fossil fuels, together with the unavoidable generation of substantial GHG. Thus clean chemical processes for both fuel production and chemical synthesis are highly sought after.

Photocatalysis, a process to drive the chemical reactions by renewable solar energy or artificial light generated from renewable electricity, provides such a zero/neutral carbon process in which all the reactions of interest can be operated under very mild conditions (eg. at room temperature and atmospheric pressure) [1], thus is also a low-cost and safe technology [2].

Photocatalysis in particular favors the activation of stable molecules as their activation is used to require substantial energy input and is kinetically very sluggish, including water splitting to H2 fuel, CO2 conversion, N2 reduction to ammonia, and natural gas/shale gas activation to high-value chemicals by photocatalysis (the concept of artificial photosynthesis).

Although photocatalysis provides a strong potential for activation of such small and extremely stable molecules (H2O, N2, CO2, CH4 etc) under mild conditions, to achieve this potential is a huge challenge. Stimulated by our research outcomes on the charge dynamics in inorganic semiconductor photocatalysis, which reveal that the low conversion efficiency in the artificial photosynthesis is due to both fast charge recombination and large bandgap of an inorganic semiconductor [3], we developed novel material strategies for activation of these molecules, e.g. H2O, CO2, CH4 and N2.

In water splitting to H2 fuel, we found out that by improving the degree of polymerisation of a polymer e.g. C3N4 the charge recombination was substantially mitigated [4]. Based on this fundamental understanding, the complete water splitting to H2 fuel in polymer photocatalyst-based suspension system under visible light has been demonstrated for the first time [5]. Furthermore, a junction, which is composed of the carbon nitride photocatalyst and carbon quantum dots (mCD) synthesised by a novel microwave method, was used to directly reduce CO2 by H2O into methanol driven by visible photocatalysis [6]. The mCD possesses unique hole-accepting nature, prolonging the electron lifetime (t50) of carbon nitrides by four folds compared to the electron-accepting carbon dots fabricated by conventional methods (sCD), favoring a six-electron product. Thus this new photocatalyst stably produces methanol with nearly 100% selectivity for CO2 conversion at room temperature.

CH4 activation is widely regarded as the “holy grail” in the catalytically chemical process, the highly dispersed atomic level iron species were synthesised on TiO2 photocatalyst by us, which shows an excellent activity for CH4 conversion, resulting into ~97% selectivity towards alcohols operated under ambient conditions by a one-step chemical process [7]. On the other hand, a C-TiOx photocatalyst with a Ti3+/Ti4+ ratio of 72.1% represents a rather high reaction rate of N2 reduction to NH3 (109.3 umol g-1 h-1) with a record apparent quantum efficiency of 1.1% at 400 nm, promising a process for H2 synthesis from water and in-situ storage into ammonia [8]. 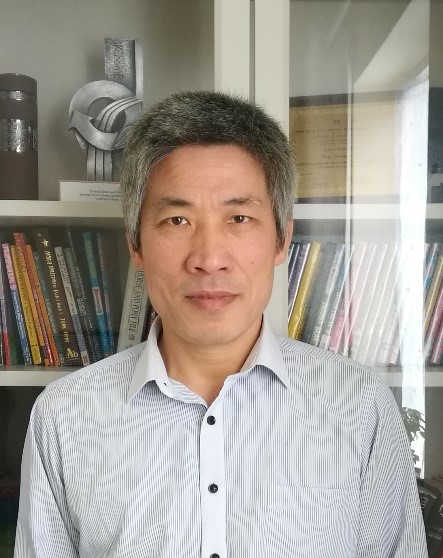 Prof. Junwang Tang is a Member of Academia Europaea, a Royal Society Leverhulme Trust Senior Research Fellow, Fellow of the European Academy of Sciences, Fellow of the Royal Society of Chemistry and Professor of Materials Chemistry and Engineering in the Department of Chemical Engineering at University College London. He received his BSc in Chemistry from the Northeastern University (1995), MSc in Materials from the Institute of Metal Research (1998), and PhD in Physical Chemistry from Dalian Institute of Chemical Physics (2001), China, respectively. Then he undertook his JSPS fellowship in the National Institute for Materials Science, Japan (2005) and a senior researcher in Chemistry at Imperial College London (2009). Prof. Tang joined the current department in 2009 as a Lecturer and was later promoted to Senior Lecturer (2011), Reader (2014), and Full Professor (2017). His research interests encompass photocatalytic small molecule activation (eg. CH4, N2, H2O, C6H6 and CO2) and microwave catalysis (e.g. plastic recycling), together with the investigation of the underlying charge dynamics and kinetics by state-of-the-art spectroscopies. In parallel, he also explores the design of the chemical reactors for the above-mentioned processes, resulting in >180 papers published in Nature Catalysis, Nature Energy, Nature Reviews Materials, Chemical Reviews, Chem. Soc. Rev. Materials Today, Nature Commu., JACS, Angew Chemie with >17,000 citations. Prof. Tang has also received many awards, the latest of which are the RSC Corday-Morgan Prize 2021 and Royal Society Leverhulme Trust Senior Research Fellow 2021, besides the Runner-up of IChemE Research Project 2020, IChemE Business Start-Up Award 2019 and the 2018 IPS Scientist Award. He also sits on the Editorial Board of four international journals, e.g. the Editor of Applied Catalysis B and Editor-in-Chief of Journal of Advanced Chemical Engineering, Associate Editor of Chin. J. Catal. and Asia-Pacific Journal of Chemical Engineering besides sitting on the Advisory Board of 7 other journals.