Is there an existential crisis which requires complete decarbonization in the next 30 years and if so, what are the challenges of the required energy transition?

There is widespread belief that unless “something is done”, the world will go through an “existential crisis” because of climate change. As a result, several initiatives calling for drastic and rapid cuts in greenhouse gas (GHG) emissions are gaining traction. However, empirical evidence shows that, over the past many decades, all measures of human development have improved significantly; food production has increased consistently; the earth is greening; deaths attributed to extreme weather have decreased by 95%; there is no statistical evidence that droughts, floods and forest fires have increased or that the rate of sea level rise is abnormal. In any case humanity has coped with past climate change (rise in temperature) caused substantially by human activities. Nevertheless, there is widespread belief that the precautionary principle requires that in order to avoid future catastrophe, the world requires to decarbonise completely and quickly. However, currently fossil fuels supply around 85% of global primary energy. Replacing this with carbon-free energy, even after assuming a 40% reduction in demand because of improved efficiency, will require the world to build over 3100 nuclear power stations of 3 GW each or over 7.8 million 3 MW wind turbines. Simultaneously, existing energy infrastructure has to be dismantled e.g. gas boilers have to be replaced by electric heating, aviation and steel and cement industries have to be largely shut down …Such change is unlikely to happen, particularly as poorer countries try to grow their economies and continue to use fossil fuels. Hence it is better to shift policy towards adaptation i.e. make societies more resilient to the effects of climate change e.g. better flood defences.

Currently, wind and solar supply 1.33% of global primary energy consumption of 581 exajoules. All alternatives to fossil fuels start from a very low base and have significant barriers to unlimited growth. The talk will then focus on transport, particularly, battery electric vehicles to illustrate this point. Even by 2040, 85-90% of transport energy will come from petroleum- based fuels powering internal combustion engines (ICE) because of the large scale of the problem. It is imperative that ICE engines are improved to maintain the sustainability of transport and there is great scope for such improvement. Banning the sale of ICE vehicles by 2035, as the U.K. government proposes, will stop R&D in this area and close the cheapest and easiest path to cleaner and better transport which requires all available technologies to be used sensibly. 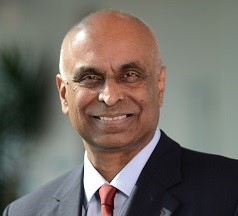 Gautam Kalghatgi worked for 31 years at Shell Research in the UK followed by 8 years in Saudi Aramco in Dhahran before retiring in June 2018. He is currently a Visiting Professor at Oxford University (Engineering Science) and has held similar academic appointments in the past at Imperial College, London; KTH Stockholm; TU Eindhoven and Sheffield University. He is a Fellow of the Royal Academy of Engineering, SAE, IMechE and the Combustion Institute and an Honorary Fellow of the International Society for Energy Environment and Sustainability (ISEES). He is on the International Board of Directors of the Combustion Institute, on the editorial boards of several journals and has served on many international advisory boards, e.g., for CCRC in KAUST. He has published around 130 papers and a book, “Fuel/Engine Interactions”, on combustion, fuels and engine research and on transport energy. This work is cited widely with an H index of 51 on Google Scholar and 44 on Scopus. He has a BTech from IIT Bombay (1972) and a PhD from Bristol University (1975) in Aeronautical Engineering. His PhD project was on supersonic aerodynamics, more particularly, on shock interactions. He did post-doctoral research on turbulent combustion at Southampton University (1975-1979) before joining Shell.

The speaker can be reached via email Kalghatgig@gmail.com.

The seminar is open to all for free. The system allows up to 150 participants.

Please connect from your computer using the following link:

You can connect from web browser (which may require installing a web browser extension) or install the GoToMeeting app on your computer to join.

You can also dial in using your phone.  (For supported devices, tap a one-touch number below to join instantly.)